Gold not out of the woods

The last time I wrote about gold (July 19), I commented on how both the round-number of 1300 and the 50-day moving average (MA) served as overhead resistance. Since that time, the price of gold has successfully broken through the 1300 level (green line in chart below) but stopped dead when it hit the 50-day MA (blue line). 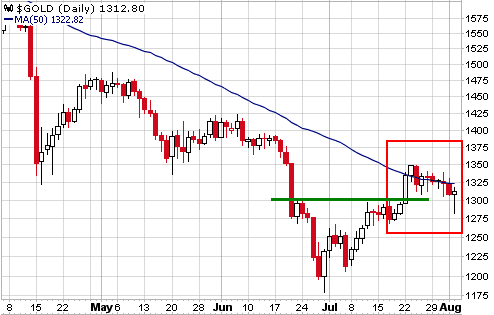 For the last nine trading sessions, gold has closely tracked the 50-day MA, gradually descending with it. On Friday, gold gave way and traded below 1300 down to as low as 1285, but then recovered and closed above 1300, forming a candlestick hammer. Although this action on Friday was encouraging with the hammer indicating buying interest below a certain level, the fact is gold's price remains below the 50-day MA, which -- as shown in the chart below -- has served as very effective resistance for the past several months. 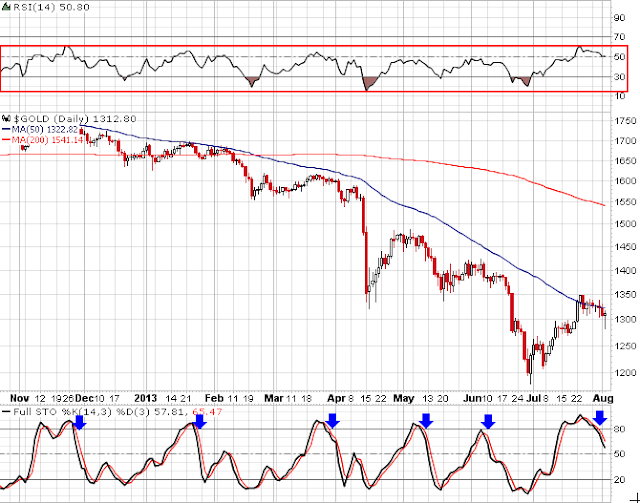 Also of note in the chart above, I discussed the RSI indicator in my last gold post, specifically how it can oscillate in a confined lower-bound of approximately 0-50 when the trend in momentum remains subdued. I wrote then, "The trend will remain down until this 50 level for RSI is breached meaningfully to the upside, getting to the 70+ level, inferring renewed thrust as buyers have overtaken control from sellers." With this recent price break above 1300, the RSI did not reach the 70+ level and if anything continues to be confined to the lower-bound range as depicted by the red rectangle. Again, to indicate a bullish change in the trend of momentum, the RSI needs to get to the 70+ level.

Note also in the chart above that the stochastic has been declining from overbought levels. In the recent past, when this indicator has descended from an 80 or higher level, price has eventually headed south. I would emphasize that if the RSI were above 70, inferring positive momentum has indeed kicked into a new gear, the decline in the stochastic would be less worrisome. The meaningful change in momentum would suggest any price retreat would likely be moderate and present a potential opportunistic entry point. But, given the current level of RSI, that's not the case.

I continue to be wary about gold, preferring to allocate assets elsewhere. I would also remind that unless I state otherwise, any comments I have about gold also apply to gold equities. The chart below shows the fairly tight relationship between gold the commodity and its associated mining equities (GDX), with the rolling 100-day correlation almost always well above 0.50 (except during the first-half of 2011, when gold bullion took off and yet gold equities went nowhere, traversing more or less sideways).

(Source of all charts above: Stockcharts.com)
Posted by Charts etc. at 10:36 AM